What to Expect When You’re Expecting a Videographer: Production and Post-Production 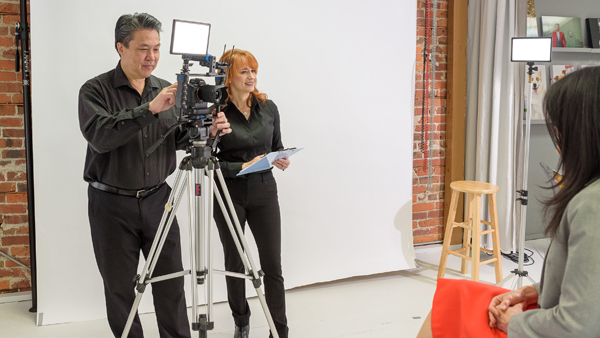 In Part 1 of this blog, I gave an “Executive Summary” of what to expect when you work with a professional videographer. Then, I went into detail about pre-production, that is, everything that goes into organizing your video project before the day of the video shoot. If you want a refresher on what you can expect during pre-production, you can find it here.

Production – What Happens at the Video Shoot

One of the great things about post-production (also known as “editing”) for you, the client, is that you hardly need to be involved at all! Here are some of the things your editors will be doing while you wait to see your video dream come to life. The process I’m describing is specifically for an interview-style “About Us” video, but the steps are similar for other videos, too. When editing, we’re going to:

Here’s an important note on timing: unless a “rush job” is requested, expect the initial editing process to take at least two weeks. Editing is an intensely creative as well as a technical process. As an editor, I know that taking several days to work on a project will get the best results. This is true even – or perhaps especially – if I spend no more than half of each day editing in the initial phases, then “sleep on it” in between. This pattern is supplemented by the occasional moment of “waking up at 3am thinking ‘Eureka! I know what to do with that section now!’”

Working with a videographer who is dedicated to detailed pre-production can save you time, money, and headache. It will minimize the amount of planning you have to do personally, because the video company handles most of the administration. You’ll also maximize the chance of having an efficient video shoot that runs on time and on budget. When you combine this thorough pre-production with attentive on-site production by your video team, and patience on your part while the video is being edited, you have the scenario that is most likely to result in a video you not only love, but also gets you the highest ROI.